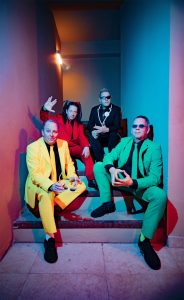 Long time fans of the podcast might remember where I interviewed Paul Robb of Information Society back in 2014 to promote their album “_hello world” that was released in September 2014. It was great to talk to him back then, and always great to see that the band is still around and producing new music. Since that interview they’ve put out 1 other new album and 2 remix albums and now have another new album coming out later 2021!! The album is called “OddFellows” and features music which they released when they re-partnered with their original label, Tommy Boy. Those 4 singles are added to 7 additional tracks to make up the album.

One of the cool things about this new album, InfoSoc are breaking audio ground — this will be the very first complete album to be released with a version rendered in THXⓇ Spatial Audio (a technology that’s used in gaming platforms to provide audio that sounds like it’s coming from ‘outside your head’). What this means to the listener is that the spatial audio technology recreates different “channels” of sound that sound as if you’re in a room surrounded by the musicians… So you might hear the drummer sound like he’s directly behind you, a keyboard in the right ear, bass in the left ear and the vocalist moves around freely. It puts you right in the middle of the performance and it’s best experienced on headphones. It’s a very cool technology and InfoSoc is just the band to take advantage of it! OF course, if you’re not interested in the Spatial Audio sound, you can get a normal stereo sound version – but why would you??

I’m looking forward to the album being released, and maybe i’ll even have a full review soon – and who knows, maybe – just maybe – another interview with Paul, and maybe other members of InfoSoc?? I know i’d like to have him (and other members of InfoSoc) on the show again! Stay Tuned! In the meantime, check out 2 of the singles (Nothing Prevails and Bennington) from the Tommy Boy re-partnering that will be on the new album when it’s released on August 6, 2021!

Thanks to ReyBee for the details on the new album – stay tuned for more!!

Donate to the show